The Grange Castle in Canada Ontario 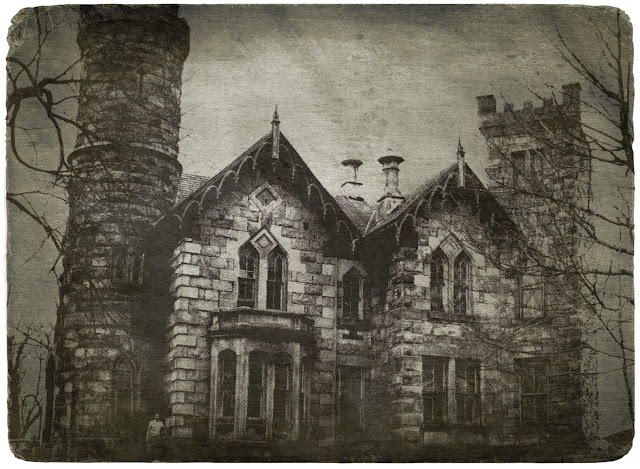 Posted by Alfredoistic at 01:57 No comments:

In 1802 James McLaren, only son of James McLaren and Janet Ferguson of Callander, Perthshire, Scotland, arrived in Ontario in the Chatham area, where he met and married Mary McNabb, a native of Argyleshire, Scotland. Hearing of the high elevation north of Toronto, they gathered together a few belongings and with their small son, Alexander, set out in 1820 for the area which later became known as the Caledon Mountain, just south of Belfountain. They found the climate to their liking and as it resembled their native country, chose a spot on the mountain’s edge and built a home. Clearing the land was the next step and they worked long hours. Mrs. McLaren was known to walk 40 miles to Toronto, carrying in her apron a quantity of sugar, which she traded for a logging chain to be used in clearing the land, and then returning the 40 miles,  carrying the chain. Three sons and a daughter were born to them. 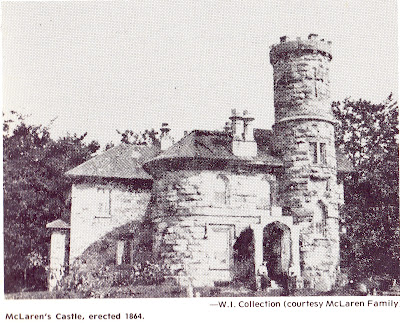 When Alexander grew older it was decided he should attend Geneva College in New York State to study to be a doctor.
However, after some time, his mother could no longer bear the separation, so he returned to the home farm. In 1851, when
almost 31, he left for the British Isles where he travelled through England to Scotland and the Isle of Islay to visit relatives, Morrison by name. Some of these relatives emigrated to Canada the following year and the daughter of one of the Morrison girls, Isabelle McNabb became his bride in 1856 and they settled in alog house on 300 acres which the family had acquired west of the original farm.

Alexander had seen the fine old castles in Scotland and haddreams of building such. Consequently in August of that year he obtained the services of a Mr. McGregor, a stone-cutter and got the stone-cutter’s tools sharpened at “Tubtown” or McCurdy’s Village, which later became Belfountain. By September they were quarrying stone on the side of the mountain east of his father’s farm and by the end of the month had finished laying the
sills.

During this time, Alexander kept busy - attending meetings concerned with the “Separation Question” and the “Reserve Question”; travelling with his threshing machine doing the neighbhurs’ threshing; acting as legal advisor for the neighbors, writing deeds, wills and assignments. In 1857 he spent some time negotiating for a railroad to run between Brampton and Owen Sound, and also was instrumental in obtaining a grant from council for the purchase of a lot on which to build a school. In 1860 he was responsible for the forming of The Good Templar Society. For a time he was owner of the Brampton Times, which he sold in 1862. In May, 1863, he was Reform candidate for the County of Peel, but the party was
defeated.

In the meantime, work progressed on the castle with quarry stone hauled to the site, and in Ianuary, 1864, the joiner work
was let to Iohn Muir, for $320. Plans were drawn up by a Toronto architect and by May 26, 1864, stonemasons, Smith and
Perry began work. The first joist was laid Iune 22, 1864 and the cornerstone, Iuly 4. Painters were hired, glass for the windows bought in Brampton, pendants for decorating purchased in Erin. On Nov. 11 the first chimney was built and on Nov. 16 they began stoning the well which was approximately 45 feet deep and located in the castle’s full-size basement. The family moved in on Dec. 31, 1864.

By this time there were four children, Iames, Mary Ann, Grace and Flora. Two more boys, Duncan and Donald were later born in the castle.
The castle was of Norman design and a replica of a castle in Perthshire, Scotland. The walls were double and constructed with air ducts between for insulating purposes. On the east corner was a tower, 51 feet high. A winding stair, having 82 steps, was built in its interior to permit sightseeing from the top of the tower. On very clear days sail boats could be seen on Lake Ontario and [with the aid of a telescope] Brock’s monument at Niagara.

The main entrance at the east corner was of Gothic design with a huge oak door opening into a long hall with rooms on either side. To the left a portion of the building was built in a horseshoe shape. This section was known as the library, book cases being built along one side. To the rear was a small room later used as the Grange Post Office. Across the hall was the main sitting room, with folding doors leading to the dining room. To the left of the dining room was the servants’ dining room with a serving window. In the west corner was the large scullery or kitchen with flagstone floor and the butler’s pantry along the north side. The north corner of the castle had a square tower containing rooms which were part of the living quarters. The first floor room was finished with birdseye maple and used as a guest room, while the second floor room was part of the nursery adjoining the master bedroom. Altogether there were four halls and eighteen rooms including nine bedrooms, with 12-foot ceilings.

In the basement beneath the scullery, was a huge stone hearth and bake-oven. The front of the oven was built in an arch shape and the door was of metal. To prepare the oven for baking, a fire was built on the hearth heating the stones to the required temperature. Then the fire was raked out and the loaves of bread placed on the warmed stones. It served a double
purpose: besides being used for baking it was purposely built with large stone pillars on the corners to support the flagstone floor above. At one time there was a large cylindrical drum-type furnace in the basement. This was discarded after a time and stoves used for heating.

In the years to follow, many distinguished guests were welcomed at the castle one of them being Alexander McLachlan,a Canadian poet. On one of his visits an autographed copy of one of his books of poems was presented to his host. By 1866, Alexander McLaren again was involved in political life and was elected reeve of Caledon Township, being a member of that council for 18 years. He was warden of Peel County in 1880. In 1866 he was also made a justice of the peace. He spent
property in preparation for the building of the Toronto, Grey and  much time surveying the Credit Valley and evaluating the with a complimentary dinner at Caledon in 1870 with “36  Bruce Railroad Co. For this a grateful community rewarded him Valley Railway and for this he was given a life railway pass  gentlemen present”. He also helped to put through the Credit
which he refused to use.

He was instrumental in forming “The Grangers" the first United Farmers groups and meetings were held in the attic of the castle. The women often met for quilting and sewing bees. Miss Mary Sterrit began to teach school in 1875 to the children of the neighborhood as the local school was several miles distant. A music teacher was also brought in . . . life was very busy and also very interesting.

The Grange Post Office was kept at the castle for forty years. The mail was brought in on horseback from Caledon, the courier delivering mail enroute to Sligo Post Office. This was situated in the home of the Bell Family who lived where the Caledon Mountain Trout Club is now located.

In 1937 the castle property was sold to a lumber company which was only interested in the acres of prime maple trees and using the castle as a bunkhouse for the scores of woodcutters and sawers. When they had cut all the merchantable timber, they abandoned the property and the great stone castle. St. Clair Lowe of Toronto, bought the property, but never made use of it and the castle was occupied for a time by Mr. and Mrs. Sandy McMurray. After a year, Mr. Lowe sold to James Ross, a Toronto lawyer. He, his wife Peggy, and daughters Susan and Maggie, moved in and over the next few years made many renovations. Partitions were knocked out, the living room enlarged to 42 feet, and electrical wiring replaced. Modern plumbing was installed and a new heating system involving three furnaces. It took one furnace to heat the main floor, one the apartment of five rooms and third located in the attic, heating the bedrooms on the second floor. One_evening in September, 1961, a party was held at thecastle and, after the guests had gone home, a fire broke out and several thousand dollars damage was done. More renovations and improvements were made. Two years later disaster struck again. Mrs. Ross and the two girls smelled smoke after they had retired for bed and rushing downstairs found the living room, where they had been enjoying the lighted fireplace, in flames.

Inglewood, Chinguacousy and Erin fire departments were called. By morning the fire seemed to be completely extinguished. Damage, this time, was only a few thousand dollars, the roof was intact. The old castle was not beyond repair, but it was not habitable so the family stayed the next night with neighbours. Disaster struck for the third time. Another neighbour awoke at dawn, saw smoke and flames shooting high in the sky. By the time firemen arrived the entire building was devastated. Everything (including two pet dogs) was lost. Only the stark stone walls were left standing. The sign at the gate said, “Balnagowan” the name of the Ross family seat in Scotland.
Several generations of McLarens made The Old Castle their home including Duncan and his family, the late Isabel (Mrs. Wilfred Fines), lean (Mrs. Donald McArthur), Grace (Mrs. Elmer McKinnon), Marjorie (Mrs. Wallace Leitch) the late Winnie (Mrs. Bill Sutton) and Alex. Margaret (Mrs. Fred Switzer) and her sister Mary daughters of Donald McLaren. 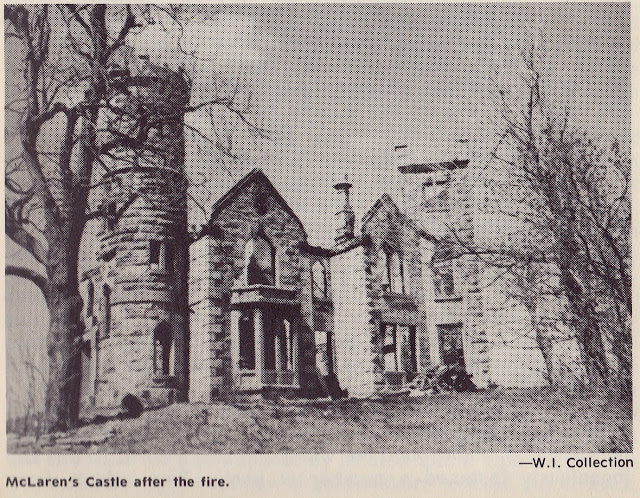 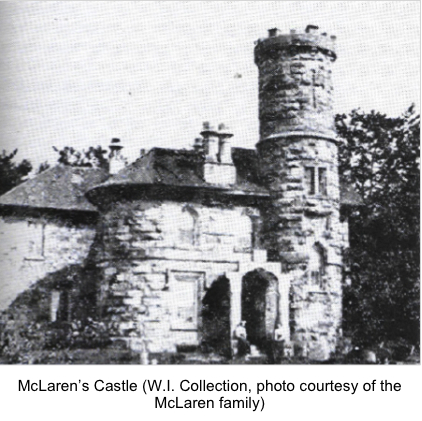 The building itself with its grand scale, meticulous stone detailing, and prominent  view, became a landmark, known well beyond the area. McLaren himself was involved in local politics both formally as Reeve of the Township but also as the catalyst behind the forming of ‘the Grangers’, the first united farmers’ group which met in the attic of the Castle.
Posted by TheGrangeCastle at 23:19 14 comments: